Before I even got my press release together, this came through from Publishers Weekly! Woohoo! And can I just give them a BIG hand for reviewing board books? Excellent!

Here's to the launch of my latest board book! 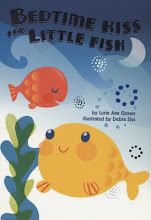 Here are some fun board book picks for summer.

This board book bids good night to sea creatures amid crisp, soothing images of stars, seaweed, bubbles and waves. “Night is dark, baby shark,” says a little, orange fish to the nonthreatening shark, adding, “Make no fuss, octopus,” to a haughty, pink cephalopod on a later spread. In the end, a large yellow goldfish kisses the little fish good night: “Time for sleep in the deep, deep, deep.” Utterly serene from start to finish, with the bonus of introducing some interesting sea creatures. Up to age 3. (June)

Posted by Lorie Ann Grover at 11:26 PM No comments:

Can You See It? Calm-A-Sutra Competition

After a day of filming and editing, here's Em's video for the Tea Council of the USA, Inc., 2009, Calm-A-Sutra! Please watch and let others know who might be interested. The more hits the higher her chances of winning! Which could be very helpful.

Whatever the outcome, we had a blast today. Just watch... 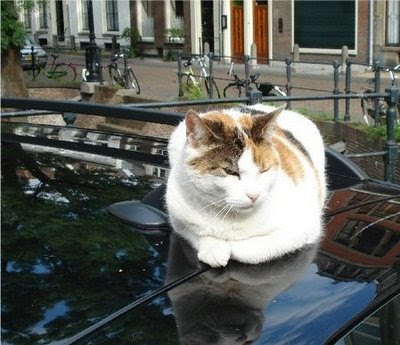 I found and cropped this image from photobucket as it was so similar to what I just saw. This haiku was sparked.

Warmly curled around
the thoughts of a cool morning
on a metal curve.

Catch the full roundup with Irene Latham at Live. Love. Explore!
Posted by Lorie Ann Grover at 7:50 AM 1 comment: 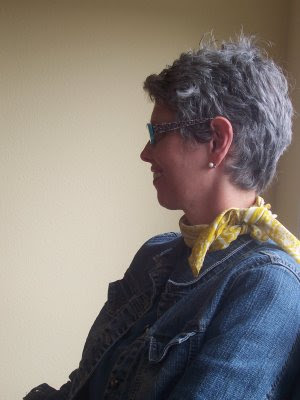 The light brushes my
frame, illuminating age
but backlighting joy.

Catch the roundup with Susan Taylor Brown at Susan Writes.
Posted by Lorie Ann Grover at 4:00 AM 7 comments:

Audio of Ellen as Berthe in Pippin!

Much to my daughter's TOTAL embarrassment, I have to post this slow slide show and audio recording where the mic fails once. Sorry, no video was allowed during the Sumner High School performance of Pippin!

The 5th Avenue Theatre (where we in Western Washington go to see shows prior to them heading to Broadway and those that then tour from NY) just nominated Ellen for her role as Berthe as:

Outstanding Performance by an Actress in a Featured Ensemble Role
for their High School Musical Awards 2009!
June 8th we are off to the awards ceremony.

"This exciting, Tony Awards-style show was created to honor the work, talent and commitment that students, parents and faculty devote to their school’s yearly musical productions. To acknowledge the value of high school theater programs and give drama students the same recognition that high school athletes receive."

Thanks to the director Ms. Street, vocal coaches Miss Miles and Ms. Bozzo, choreographer Brenda Henson, the entire cast and the pit, led by Mr. Carl! Congrats, El! (And sorry for the embarrassment.)

Here's a sneak listen in to Ellen as Berthe in Pippin with the cast from Sumner High School!

WHAT? Are you kidding me. Bring it on. ADAM is my American Idol. Period. Exclamation point! What in the world happened? I called for 1 1/2 hours last night!

I am having a very sad moment here, peeps. Here's to Adam. My American Idol.

Spreading the word! Now off to set up CoverItLive so there's a forum to chat in!
Posted by Lorie Ann Grover at 8:16 AM No comments:

Okay, my friend David Hammermaster always laughs at my cougar concern. But come on! I live in Washington! Wild life abounds.

Just this morning a HUGE possum was trucking it across the next door church's lawn. Holy Possum, Batman! It looked like this one: I know, like right? And the above mentioned Mr. Hammermaster went jogging past moments later. What little did he know!

Then I drive my daughter to choir, and the radio announces black bear spottings in Ballard. Ballard is a CITY, everyone. A black BEAR.

Then my girls are going hiking later today with a family that keeps an eye out for cougars on their property. COUGARS.

This is the Wild Wild West, so everyone can just stop laughing at me. Do you hear that, Mr. Hammermaster? I say, "Jog a little faster."
Posted by Lorie Ann Grover at 8:43 AM 5 comments: 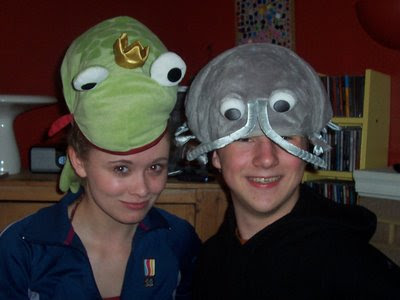 Hats
Isn't the day just
better with a frog hat or
pill bug on your head?
Catch the full roundup with Kelly Polark at Kelly Polark.
Posted by Lorie Ann Grover at 6:51 AM 5 comments:

I have an OOPS (Out of Print Sadly) report. But it's not so sad, which I'll explain.

My hardback print run of Rainy Day Slug has completely sold out. 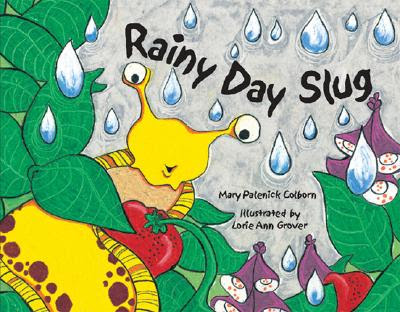 There aren't even any remainders for me to snatch up. Here ends the life of the hardback, apart from those in libraries and in homes. On the good side, if you have one, they might gain value!

The great news is that the paperback did launch April 1st. 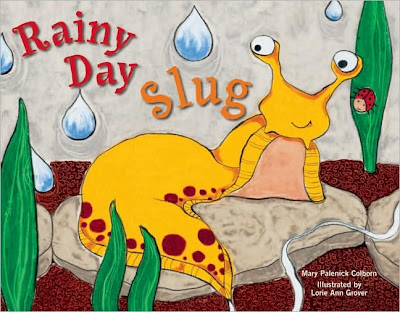 The story lives on! It's always so fun to spot this work on my ventures into Seattle.

If you visit the needle, look for a copy in the gift shop. :~) Thanks to all the slug lovers who have sustained this work! And a special thanks to author Mary Palenick Colborn. Onward!
Posted by Lorie Ann Grover at 9:50 AM 5 comments: My world
englobed
and echoed
until I see
beauty.

15 Words or Less with Laura Salas. Catch the Poetry Friday roundup with Anastasia Suen at Picture Book of the Day.
Posted by Lorie Ann Grover at 7:00 AM 2 comments:

I'm celebrating! It's such an honor that the National Book Foundation chose to award rgz in their first ever Innovations in Reading Grant.

Here was the criteria for their site:

The Foundation's first year of offering the Innovations in Reading Prize (IRP) saw 150 applications from 30 states. Applications fell into the following categories:

A selection process was created based on the following criteria: level of innovation, impact and need, with innovation always carrying the most weight. Impact and need came into play only in cases where two programs were judged to be equally innovative. “Innovation” was not limited to meaning only technologically innovative. In some cases, innovation meant identifying a need in the community and developing a program to address that need in a simple and effective way. In all cases, selections were made to reward programs that create and sustain a life long love of reading.

The whole story is here. And we hit Publishers Weekly this morning, too! I'm off to a meeting now with the divas: Justina, Dia, Holly Cupala, and Melissa Walker. If you hear a squee from the Northwest, it's us!

Posted by Lorie Ann Grover at 7:51 AM No comments:

In honor of Latina Book Month and rgz guest author, Laura Resau, I wrote this for Poetry Friday. 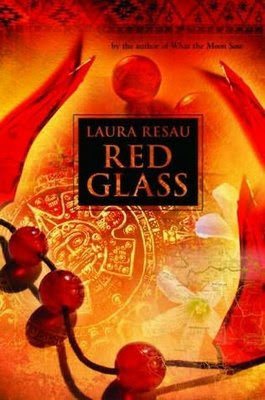 Catch the full roundup with the wonderful Maya Ganesan at Allegro.

Little Willow has just posted the Red Glass Roundtable. Check out the discussion this month!