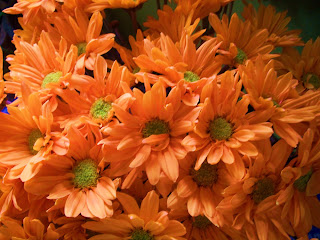 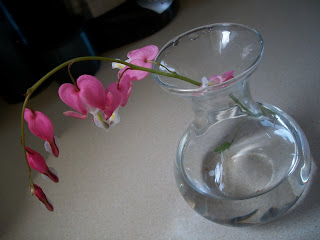 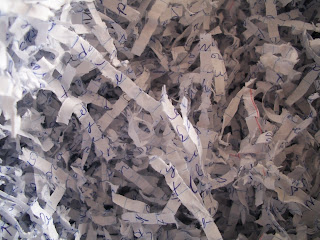 Silenced Tongues
Too many words in
my journal, so I shred them
into silent strips.
Lorie Ann Grover, 2011
Posted by Lorie Ann Grover at 11:12 PM No comments:

Because I was a former member of the Miami Ballet Company, I had so many friends ask what I thought of the movie Black Swan. It kept coming up continually in conversation. At the same time, my daughter was warning me not to watch it due to what she had heard of the imagery and suspense.

The movie kept niggling me, and so I watched, mostly to see how they filmed a ballet movie with a lead who had only studied a year, no matter how rigorously. I say wholeheartedly, that Natalie Portman's acting and dedication deserved the acclaim she received. That aside, I have to say the movie was a huge disappointment to me on several levels.

* This ballet movie was basically shot from the chest up. I understand wanting to be close to the dancer, to feel as if the viewer is on stage, but this is a ballet movie. The decision was an obvious solution to cover lack of technical dance skill.

* The work claimed to be a representation of the ballet world. While I appreciated the realism of how the art taxes the body, it is not part of the culture for ballet masters to molest their dancers in order to better role depictions.

*  I found the plot shallow, as a mirror of Swan Lake, while I was essentially watching an adult version of Tangled.

* The graphic sex scenes reminded me Halle Berry's performance and award for Monster's Ball. I don't find the overtly explicit content necessary for either plot line, and the result is that those scenes become too dominant in the pacing. I can only hope that Oscar attention is not brought to these films because of the scenes. It would belittle both the actors and viewers.

* I never experienced the terror intended and actually laughed when Nina's legs were transformed.

Positively, I thought the sound effects helped propel the story. I found the mother to be the most engaging, layered character.

At the conclusion, I felt like I had watched an episode of Dancing with the Stars instead of So You Think You Can Dance, despite Natalie's fierce dedication and work. Ballet can't be mastered in a year. My gut reaction was to reach for The Turning Point. There is a ballet movie built on a solid plot, with exquisite performance, and without contrivance.
Posted by Lorie Ann Grover at 10:18 AM No comments:

Thanks to Young Adult Reader Reviews, Australia  for posting these awesome critiques from teens. Here are a couple snippets. Thanks, mates!


"Hold Me Tight was an extremely powerful novel...The text was really descriptive and told many feelings...I would give it a rating of 9 out of 10."
Matthew, age 11, Canberra, Australia
"Hold Me Tight got my emotions going on a roller coaster ride. It has a lot of meaning and is very powerful. I really connected with Hold Me Tight...Hold Me Tight is a great book that will get your emotions flowing and you will never want to put it down until you’re finished."
Madi, Year 9, Canberra, Australia
Posted by Lorie Ann Grover at 8:42 AM No comments: