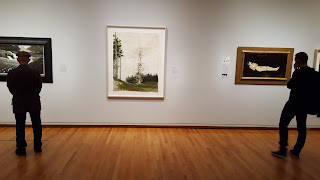 I took my mother-in-law and mother to the Seattle Art Museum yesterday to celebrate the work of Andrew Wyeth. I had always admired his dedication to realism when so few artists were creating in a similar manner. I appreciated the haunting stories within his paintings.

As always, the Seattle Art Museum has created a beautiful, honest exhibit, this time showcasing Andrew Wyeth's life work. The accompanying literature was informative and intriguing.

What I hadn't realized is that I had formerly missed Andrew's reveal of his nude paintings of thirteen year old Siri. I had missed his acknowledgement of his affair with Helga and his representations of her while he was married to Betsy. So, as I toured the exhibition, noting the intense detail, the mastery, and repeated images of death, I found myself before paintings of a nude thirteen year old girl. And then, as the museum calls them, I viewed the "erotic paintings" of Andrew's mistress. Trying to take everything in and process, I heard a nearby teen girl say, "Well, at least she was of age."

In our day, in the midst of the #MeToo revolution, should we be staring at paintings of a thirteen year old girl, painted by a man who described himself as "a secretive bastard," according to Time magazine. Yes, an adult Siri Erickson seemingly gave her consent then and now, as the article states:

"Siri, now 32 and the mother of two girls, recalls no embarrassment or awe about posing nude for Wyeth when she was 13. 'He would get totally involved in his work. It was as if you were a tree,' she says. 'He's a normal, everyday person. He does paint good, but he's just Andy.'"

Yes, this exhibit is a retrospect of Andrew Wyeth's work, but would it be better to leave empty spaces where the nude, underage Siri paintings now hang? Why are we not applying the same #MeToo standards to art? This is not a prudish question. This is not a call for censorship. This is about honoring a teen girl. There is a reason Andrew kept the imagery a secret until Siri came of age. What gave him the right to look until then?

Seattle Art Museum, this is a thirteen year old girl.  What are we saying by looking and saying nothing?