To Be Heard: Best Documentary of the Year, NYT

So much to say about this documentary To Be Heard. Justina Chen and I were privileged to be asked to screen the film and offer comments awhile back. It was a blast and very much like critiquing a novel. We felt at home with the producers and other guests as we dissected and discussed the early work.

The film was completed and eventually, we were guests at the Seattle Film Festival where the documentary ended up sweeping the awards. As the above poster shows, it's done the same in many cities. Here I am with Pearl, one of the three featured poets in the documentary. She's a resilient powerhouse! 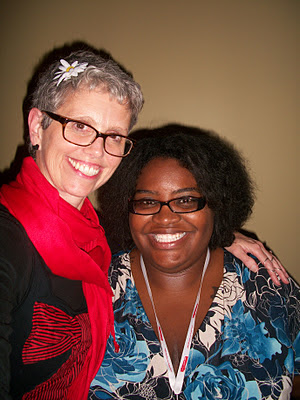 And now The New York Times just named To Be Heard the best documentary of the year!

"Ultimately, though, the intimacy of the portraiture is so raw that it transcends sociology. These students — Anthony Pittman, Pearl Quick and Karina Sanchez — are three of the most authentic and complex young adults you’ll find in any film this year. And each is a genuinely great writer: technically accomplished and emotionally overwhelming. They aren’t just the subjects of “To Be Heard.” They’re its stars."

Email ThisBlogThis!Share to TwitterShare to FacebookShare to Pinterest
Labels: Justina Chen, Pearl Quick, The New York Times, To Be Heard

I have heard of this (no pun intended!) but I haven't seen it yet! Glad that you got a chance to see it, and that you enjoyed it. :)

And to be a part of the process was amazing!